A Letter From the Sr. Vice President, Michael Riggs 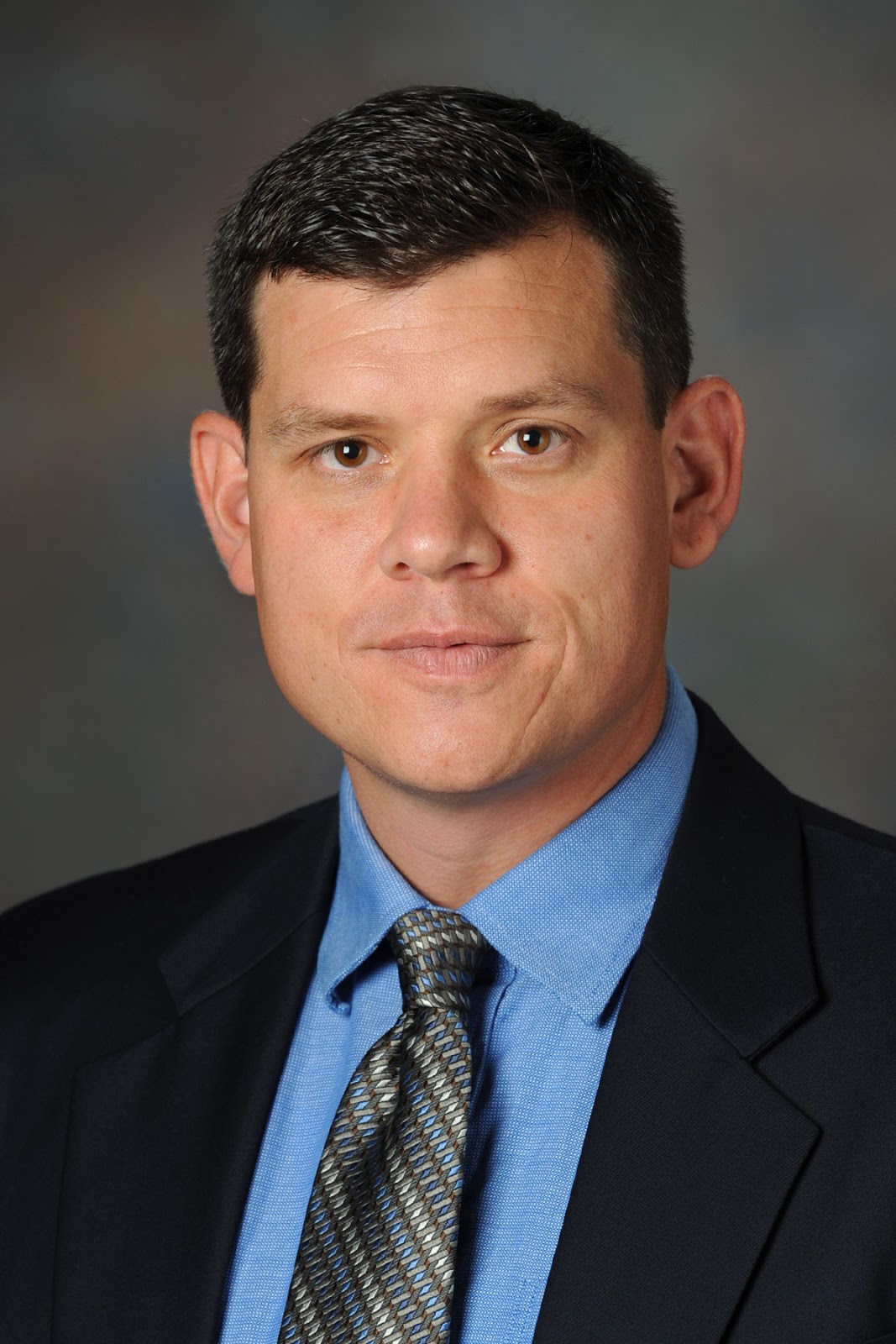 When you think of J&J, you think of high quality truck bodies. And for good reason! We’ve been manufacturing J&J bodies for over 50 years. However, in this issue of The Long Hauler, we are going to highlight some of the interesting custom welding and fabrication projects we’ve been working on across a variety of industries. At Somerset Welding & Steel (the parent company of J&J Truck Bodies & Trailers), we’ve invested in equipment and technology that extend our capabilities beyond standard body fabrication. From sub-arc and robotic welding to specialty presses and shears, our fabricators and designers have the right equipment for just about any job. Our experienced workforce offers decades of mechanical, hydraulic and advanced welding skills to support complex integration projects. Most recently, we built manifold trailers that incorporate hundreds of feet of high pressure piping for a well services company. Somerset Welding & Steel is also collaborating with another firm to offer state-of-the art dust control solutions at active drilling sites. And in keeping with our expertise in truck bodies, we are manufacturing custom steel bodies for Morooka, a new customer that provides rubber crawler products to the construction, environmental, and farm industries. Our enthusiastic and can-do approach on these highly specialized projects does not mean that we are not body builders first. The J&J Truck Bodies & Trailers brand is the heart of our company. Our custom fabrication is just an example of how we can be a true partner to your business. As we reflect on the past year, we want to thank all our customers for allowing us to help them grow and succeed.

Sincerely,
Mike Riggs
Posted by Unknown at 8:16 AM No comments: 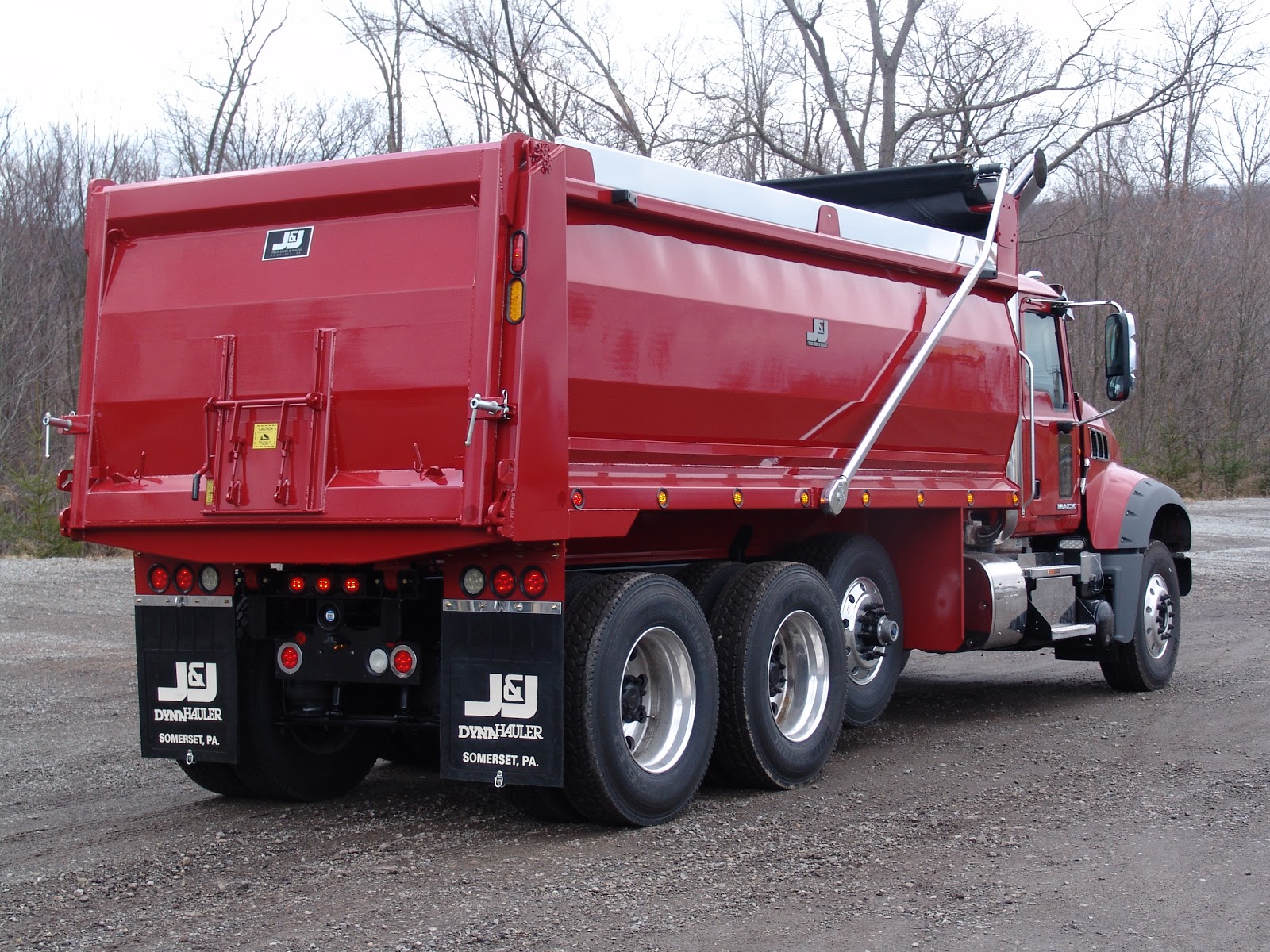 This multi-purpose dump body is an excellent solution for hauling asphalt today, and shot rock tomorrow. The J&J UltraLight steel dump body is comparable to aluminum dump bodies in weight with the proven impact and abrasion resistance of HARDOX® steel. If you haul rock, gravel, asphalt or other aggregates, you owe it to yourself to check out the ultra light crossmemberless dump bodies from J&J. This UltraLight was on display at J&J’s booth at the 2012 Mid America Show. The chassis was provided by Harvey Mack.
Posted by Unknown at 6:09 AM No comments:

J&J is pleased to announce that all J&J manuals are now available online. One hard copy of your manual will still be included in your truck (along with your complimentary J&J T-shirt and ball cap), but for your convenience, you and your staff can also access it directly from our web site. Each manual will come with a unique login and password. Go to www.jjbodies.com and click on the Customer Login button. Enter your information, and a pdf of your manual can be downloaded. It’s just that simple.
Posted by Unknown at 6:03 AM No comments: 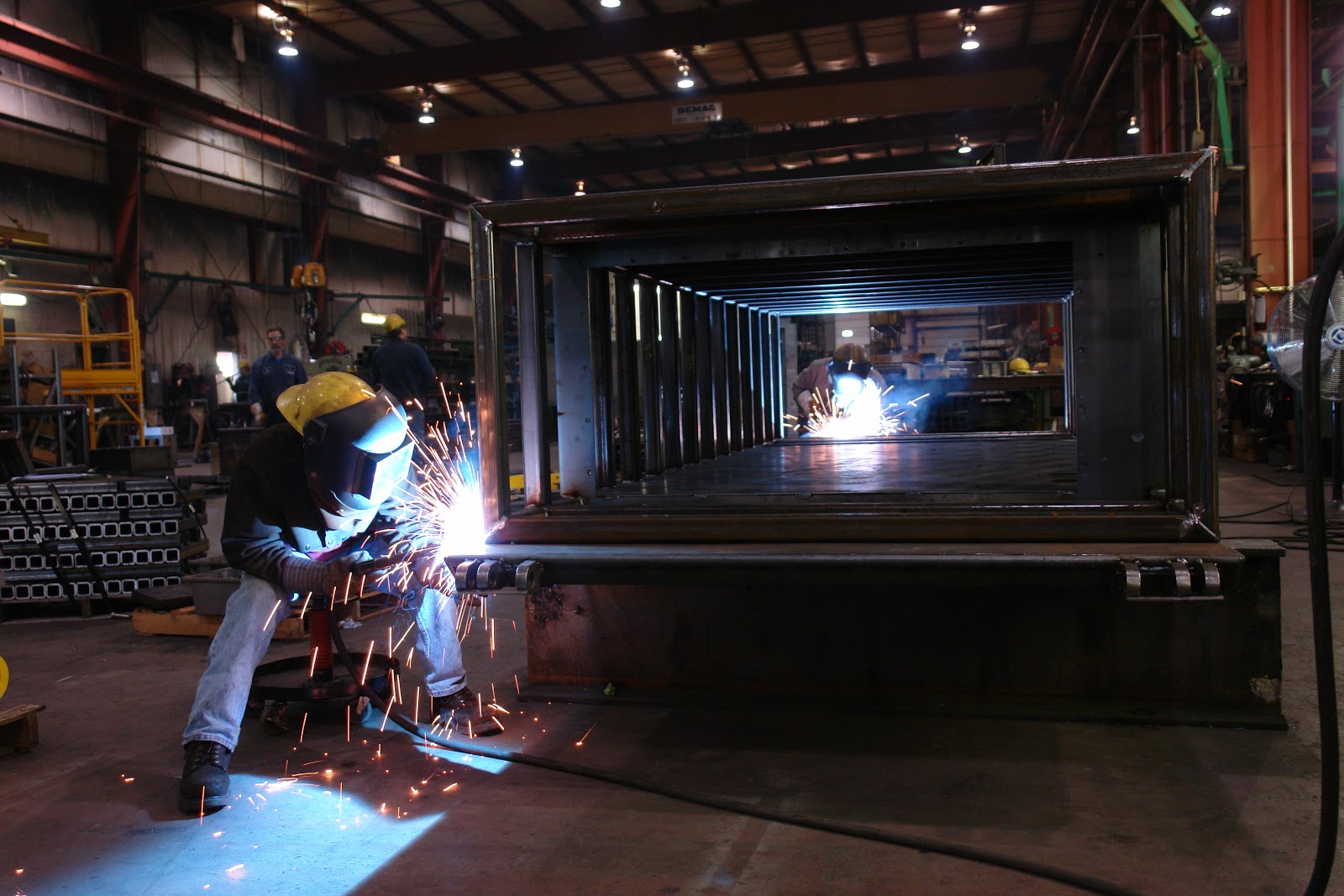 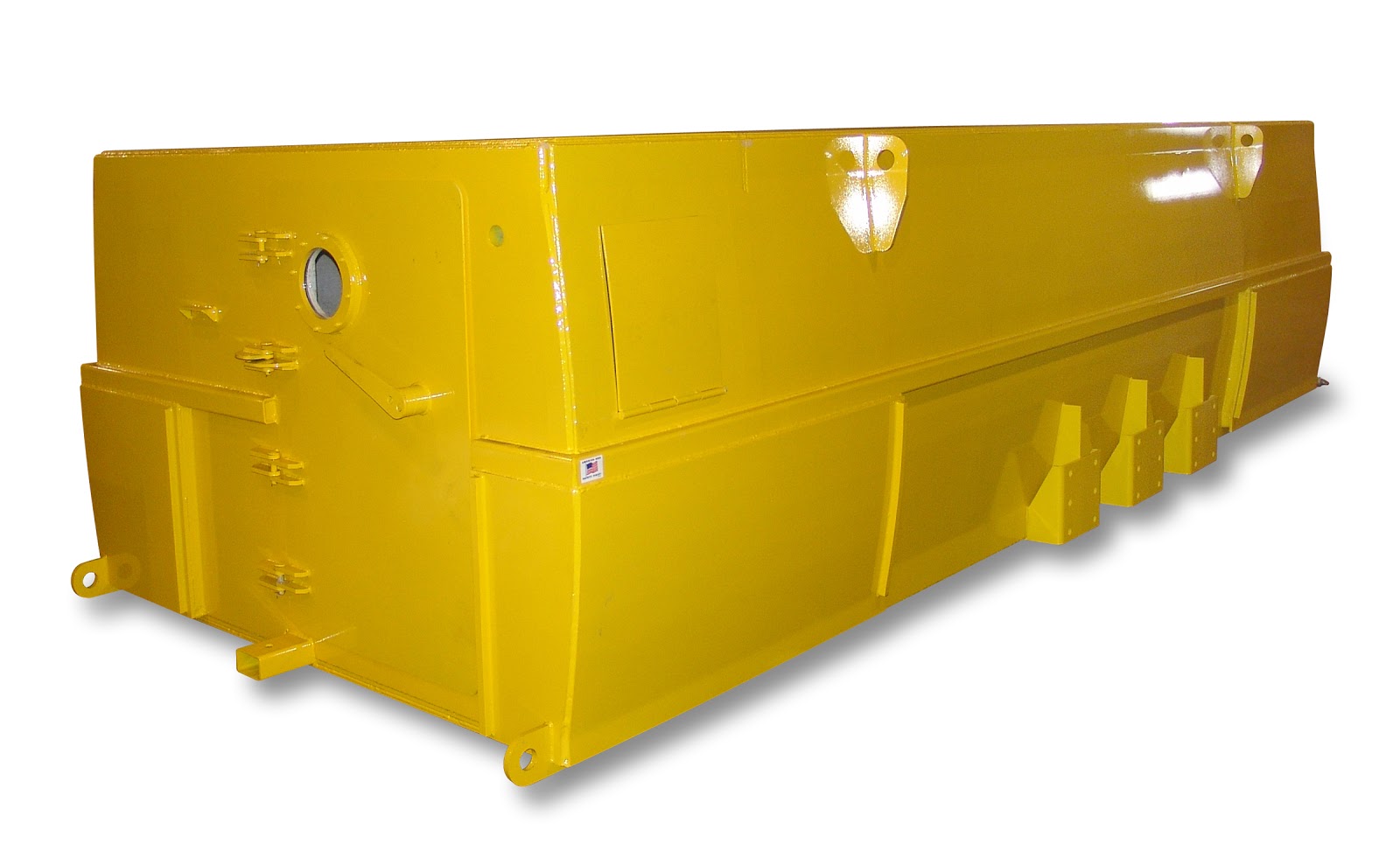 Somerset Welding & Steel is manufacturing steel vessels for six different models of mine safety chambers. The chambers provide oxygen, food, water, and safe haven for miners in case of emergency. The walk-in chambers are equipped with air-locks to purge poisonous mine air prior to entering the main safety chamber. 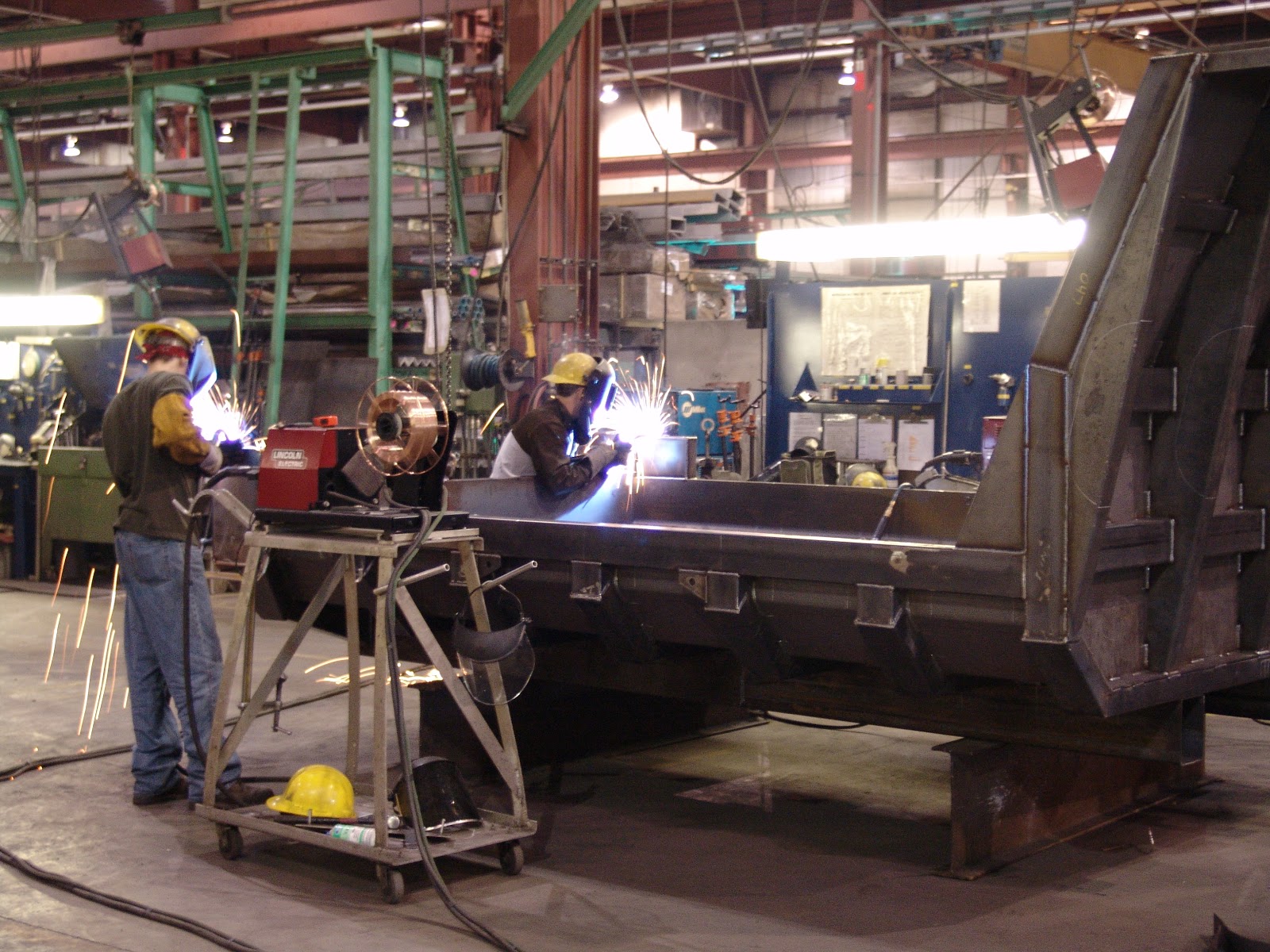 Here, J&J welders work on a steel bed that will be installed on rubber tracked carriers as shown below. The carriers are used by rail and utility companies to clear rough and swampy terrain, making it ready for installation of oil and gas pipelines, railroad tracks, and general construction. 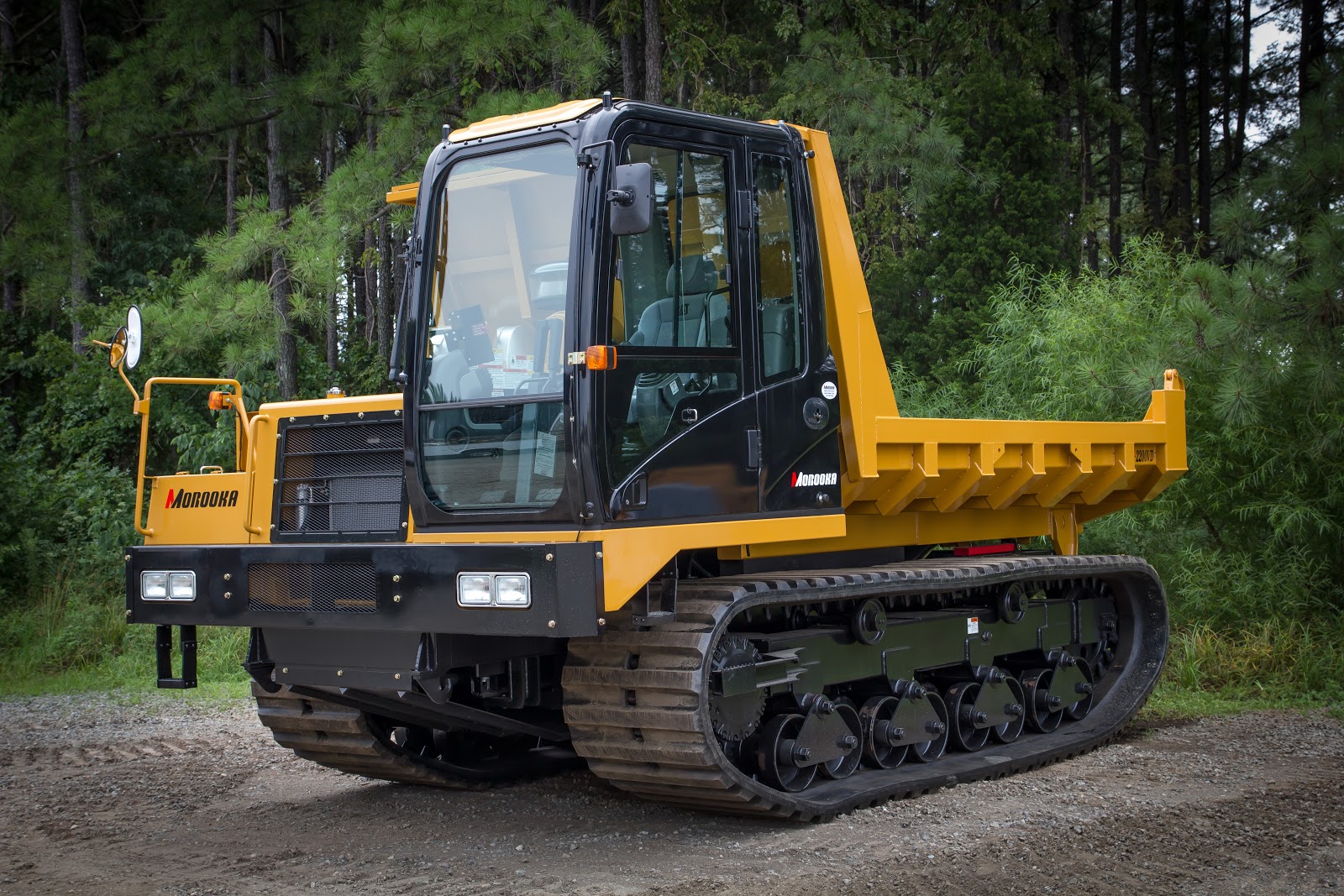 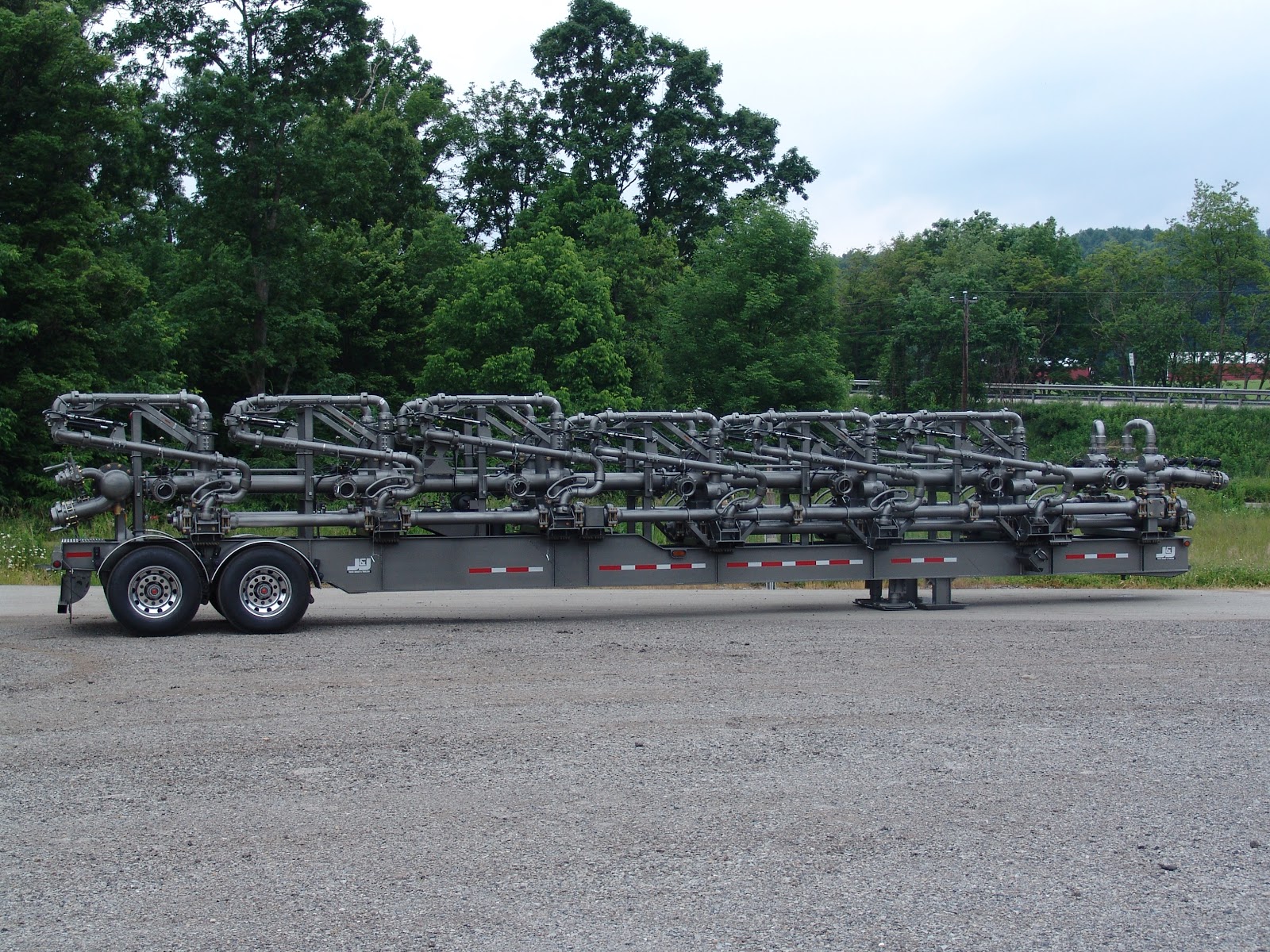 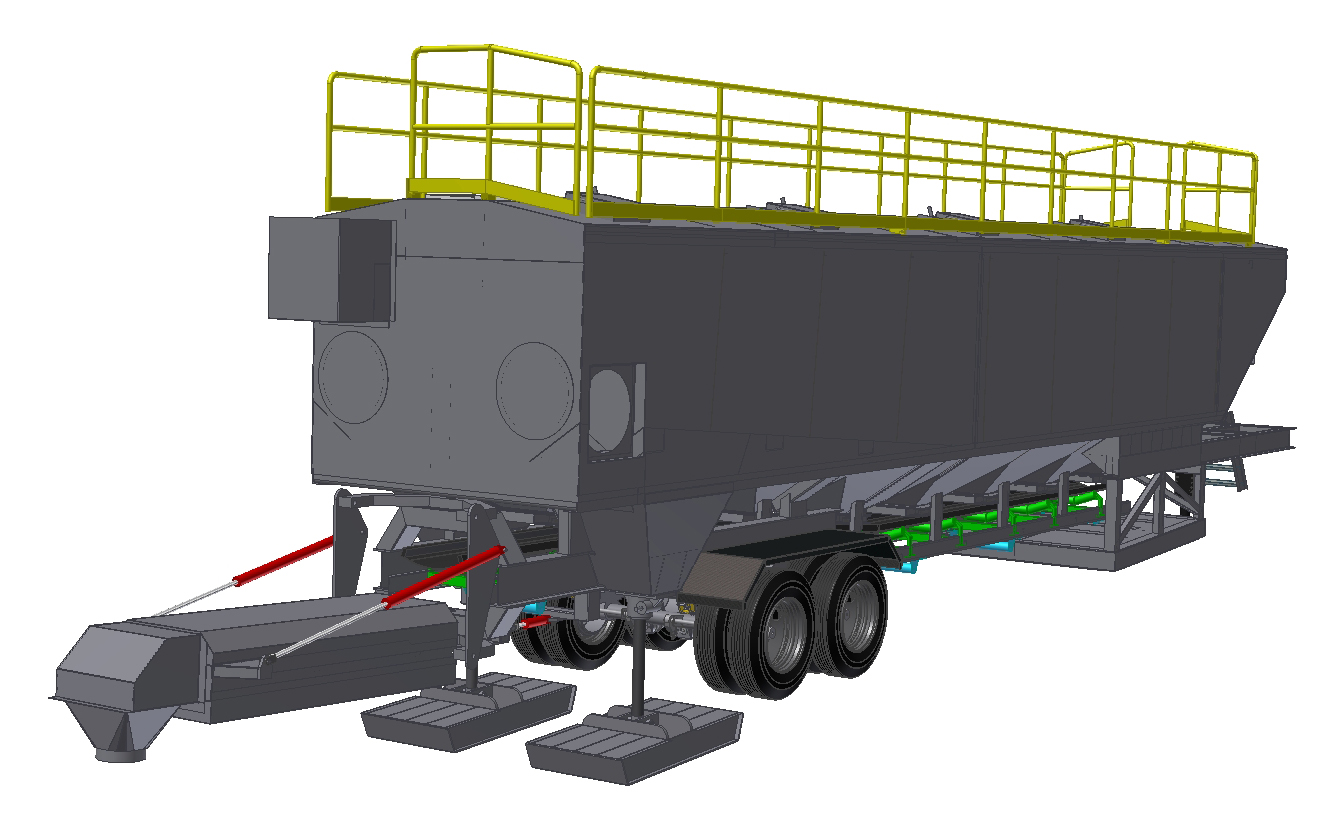 On The Road With J&J

MDC:  Eight of these J&J medium-duty dump bodies were built for the Delaware Dept. of Transportation. The bodies are 10 feet in length, 96 inches wide, and 28 inches high. Barr International provided the chassis.
Posted by Unknown at 5:42 AM No comments:

Caterpillar
says early response to the new Cat® CT660 Vocational Truck, introduced in 2011 and on display at MINExpo 2012, has been positive. According to some of the truck’s first buyers and drivers, the new heavyduty Class 8 truck is surpassing expectations for reliability, productivity and comfort. With its eye-catching style, rugged components, exceptional visibility, driver comfort features and easy-to-service design, the CT660 is proving to be a natural extension of the Cat product line. 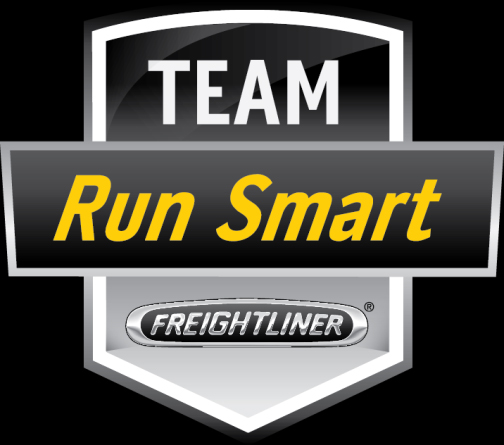 Hino Trucks’
new Class 5 195 (diesel) and 195h (hybrid) COE trucks will be arriving across the country this fall with the launch of Hino’s new cab-over. Both trucks feature 210 HP and 440 lb-ft of torque from Hino’s 5-liter J05E Series engine. Both models also feature an ergonomically friendly wide cab with a standard 33” frame rail width, and a standard center-mounted rear fuel tank. The cabs’ styling emphasizes aerodynamics and visibility and offers a roomier interior and versatile mobile workspace.

Kenworth
announced that Truck Enterprises, Inc. is celebrating being in business for 50 years this month. Dwight Hartman, a Harrisonburg, Va. native, founded Truck Enterprises in 1962, as one of the first Kenworth truck dealers on the East Coast. The company employs 350 people across the Mid-Atlantic and it also awarded three scholarships in the amount of $1,000 to high school-age children of employees
for continuing their education at the college level or a vocational-tech school.

Mack Trucks
expands their presence in the US with assembly of the MACK mDRIVE® automated manual transmission. More than a third of the highway trucks currently rolling off the assembly line at the Macungie, PA truck plant feature the automated manual transmission. The mDRIVE® transmission improves fuel efficiency and provides better drivability and enhanced driver satisfaction. The investment in this technology by MACK created 50 new jobs at their Hagerstown plant.

Navistar Defense Canada
announced recently that it supplied the Royal Canadian Mounted Police (RCMP) with International® MXT Armored Personnel Carriers. The new vehicles will provide increased protection and rescue capabilities for officers and the public during high-risk situations. Navistar has used
its manufacturing and engineering flexibility to customize the MXT carriers to meet the RCMP’s specialized needs. Vehicles were produced in West Point, MS.

Western Star
introduces new powertrain options for all 6900 truck configurations. The DetroitTM 15.6 liter DD16® engine increases fuel economy and features up to 600 hp and 2,050 lb per feet of torque. The Detroit Series 60® Tier 3 engine is now available for the Western Star® 6900TS truck, ideal for the
most rugged off-highway applications. The Allison RDS 4500 and 4700 automatic transmissions are also available for the 6900TS.

Volvo Trucks
today launched its Proven Tour, an interactive customer and dealer road tour showcasing the company’s proven leadership in fuel efficiency, driver productivity, safety and vehicle uptime.The Proven Tour will stop at 27 Volvo Trucks dealers throughout the U.S. and Canada during the next four months, making its first stop at Pare Centre du Camion Volvo in Quebec, Canada. A Volvo VNL 780 tractor will pull the 53-foot expandable Proven trailer, which was built to serve as a mobile experience and educational facility for Volvo dealers and customers.
Posted by Unknown at 5:27 AM No comments:

Natural Gas Usage by US Trucks Likely to Increase Dramatically 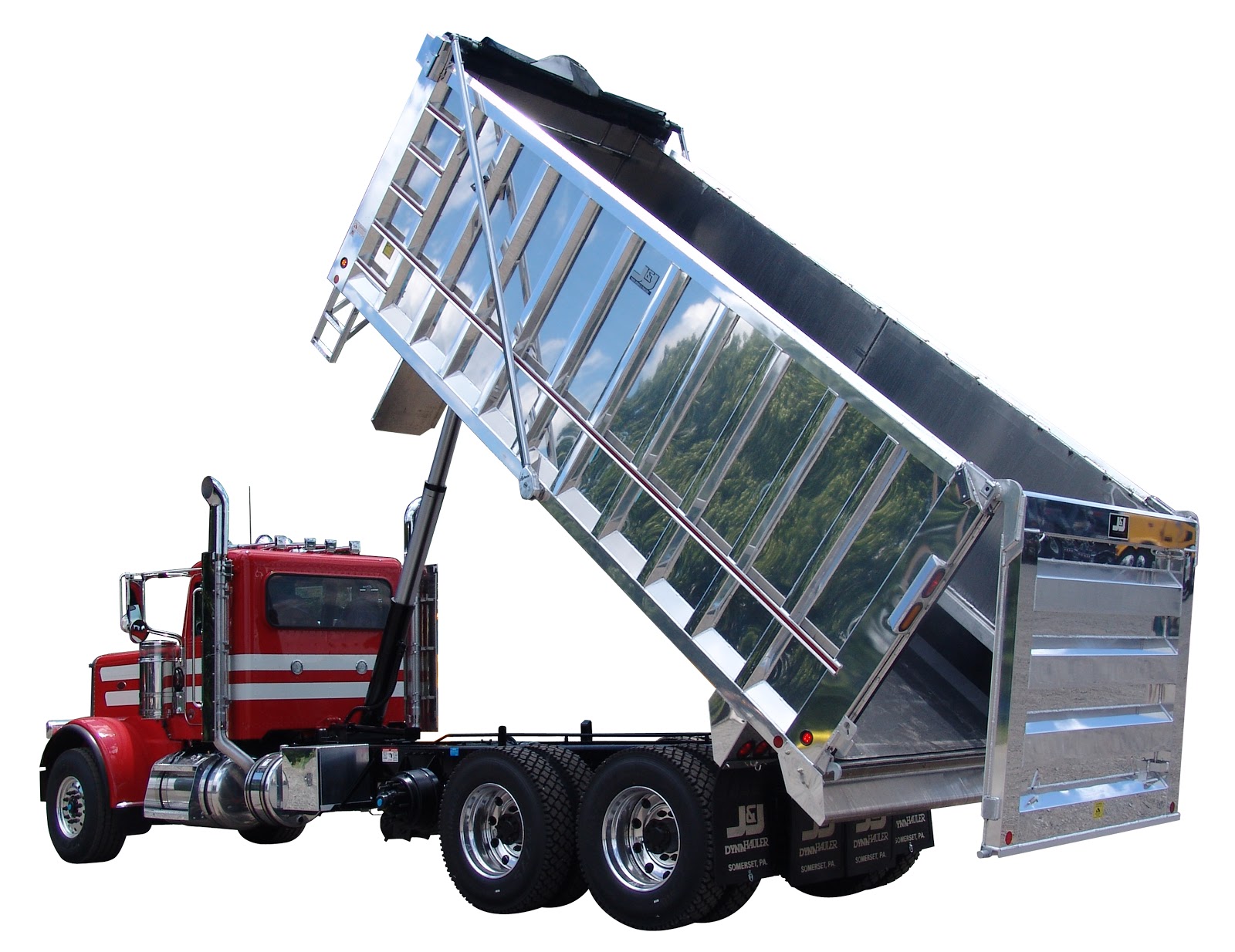 Hunter Truck Sales, Smithfield, PA, provided this Peterbilt chassis and J&J mounted a polished aluminum 19 and a half ft. dump body with 72 inch sides. DynaHauler Material Haulers (MH) are J&J’s most popular brand. According to a recent article on Reuters.com, the use of natural gas in U.S. trucks and fleet vehicles could skyrocket over the next two decades as low prices and new infrastructure provide incentive to switch to the cheap fuel. This research report was released last month. Record increases in U.S. natural gas production, thanks to prolific shale deposits, have pushed prices to 10-year lows this year, and they are likely to remain depressed, making it an attractive alternative to more expensive diesel for the foreseeable future.
Posted by Unknown at 1:10 PM No comments: 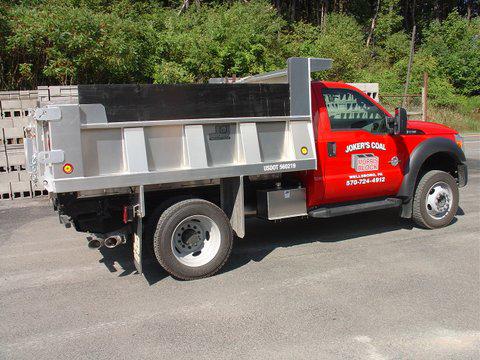 Send your J&J photos to us and we’ll publish in our newsletter and on Facebook. Email them to sales@jjbodies.com with your name, company name, and what you are hauling. $10 gift card for pictures we use!

Posted by Unknown at 1:01 PM No comments: 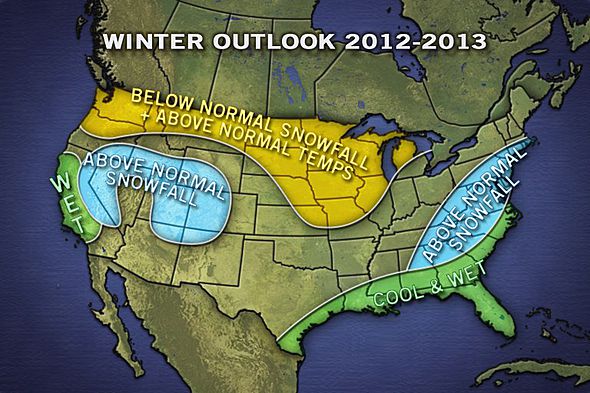 According to AccuWeather.com, following a snow drought during winter 2011-2012, the mid-Atlantic and southern New England will get a snow dump this winter. Above-normal snowfall is forecast for the major I-95 cities, including New York City, Philadelphia, Baltimore and Washington, D.C., during winter 2012-2013. At J&J Truck Equipment, we have everything you’ll need to maintain safe roadways, parking lots, and driveways this winter. J&J Truck Equipment is an authorized distributor for leading snow and ice equipment brands such as Boss, Fisher, Henke, Meyer, ProTech, and Swenson. Let our knowledgeable, factory trained staff help you select the equipment that meets your needs, and your budget.
Posted by Unknown at 12:04 PM No comments:

Order Your Next Lube Body from J&J 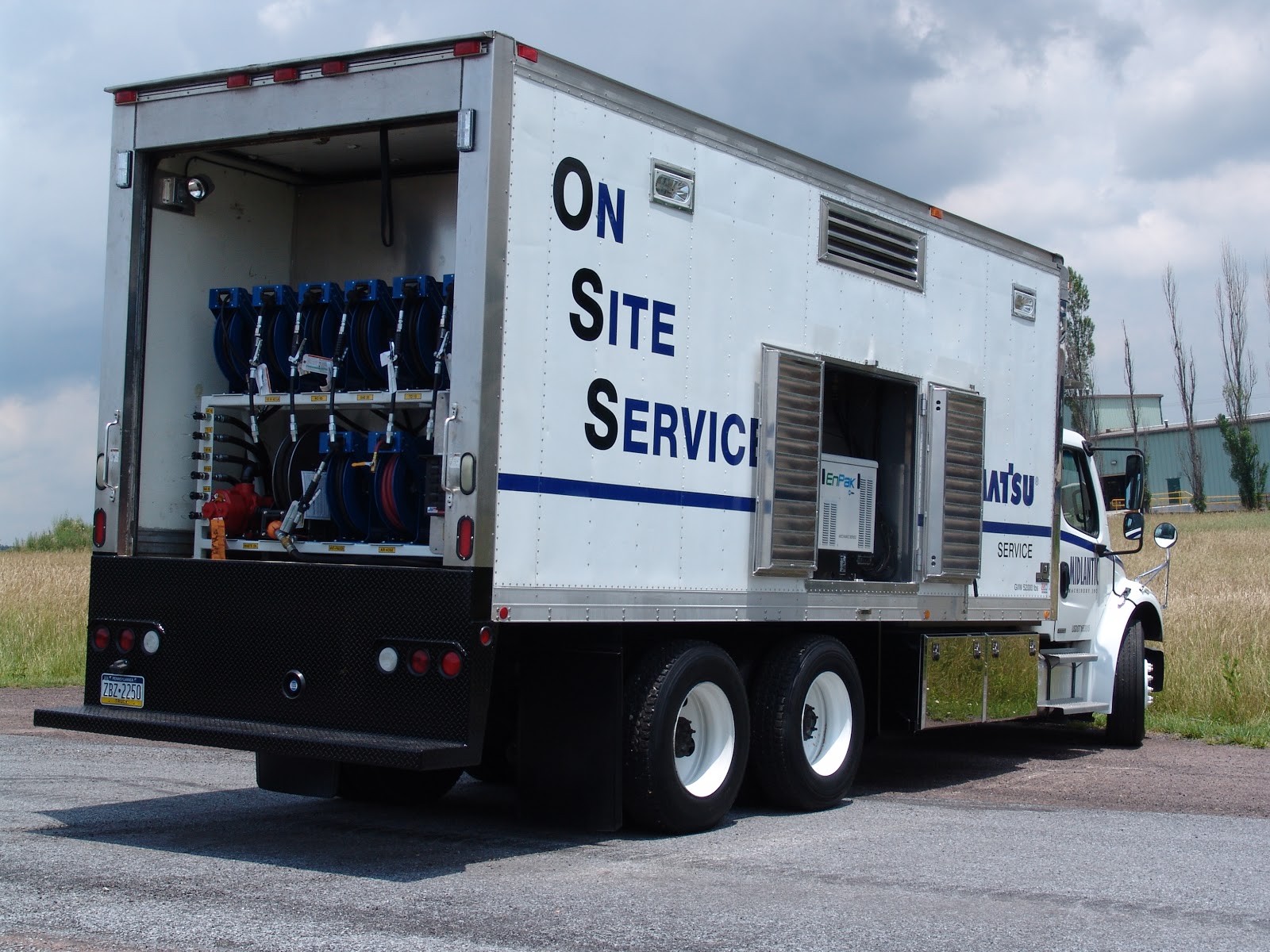 Avoid costly downtime with custom lubrication trucks by servicing your equipment on-site. Choose from enclosed, open, or partally enclosed configurations. Hoses and reals can be located at the rear or side of the truck for operator safety and ease of use. At J&J Truck Equipment, we partner with industry leaders like Stellar, Graco, Webasto, Miller EnPak, Vanair, and many others to provide J&J customers with the most efficient and quality built products on the market today. Our ISO 9001:2008 certification demonstrates J&J’s commitment to quality workmanship...always.
Posted by Unknown at 11:56 AM No comments:

This winch tractor was featured at J&J’s outdoor booth at the Eastern Oil and Gas Show late last summer where it attracted a lot of attention. Wow, awesome, gotta have that truck, were just some of the comments we heard during the event. Decked out with polished aluminum plate, chrome and custom light packages, this tractor is built to withstand many years of hard work. The winch tractor is the workhorse of the oil and gas fields. J&J’s new severe service winch package is engineered to maximize productivity with a focus on operator comfort. From the full length, lockable chain trays and heavy-duty, easy access work platform, to the optional wireless remote controls, J&J’s winch rig outs keep loads moving under the most demanding conditions. 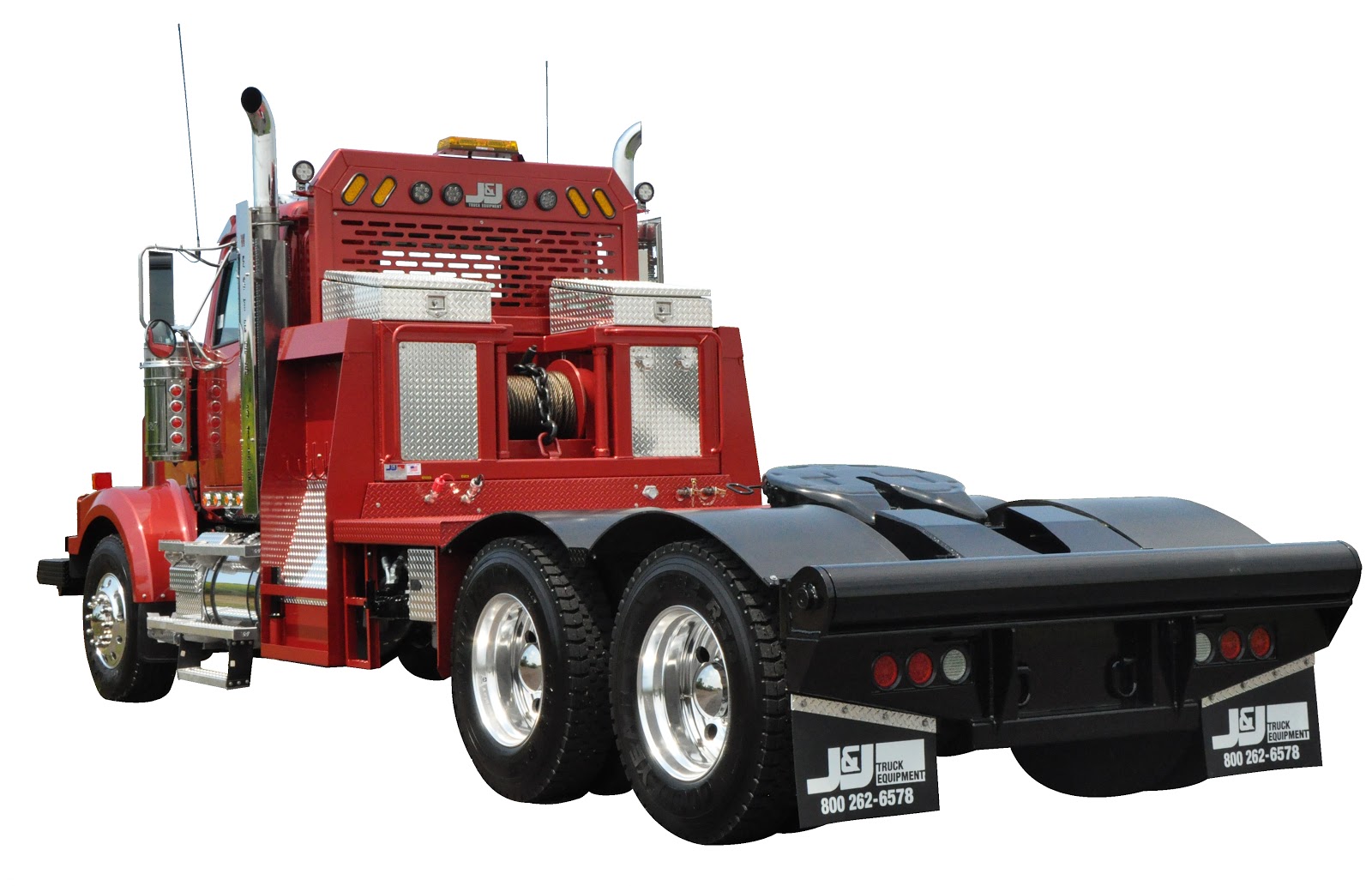 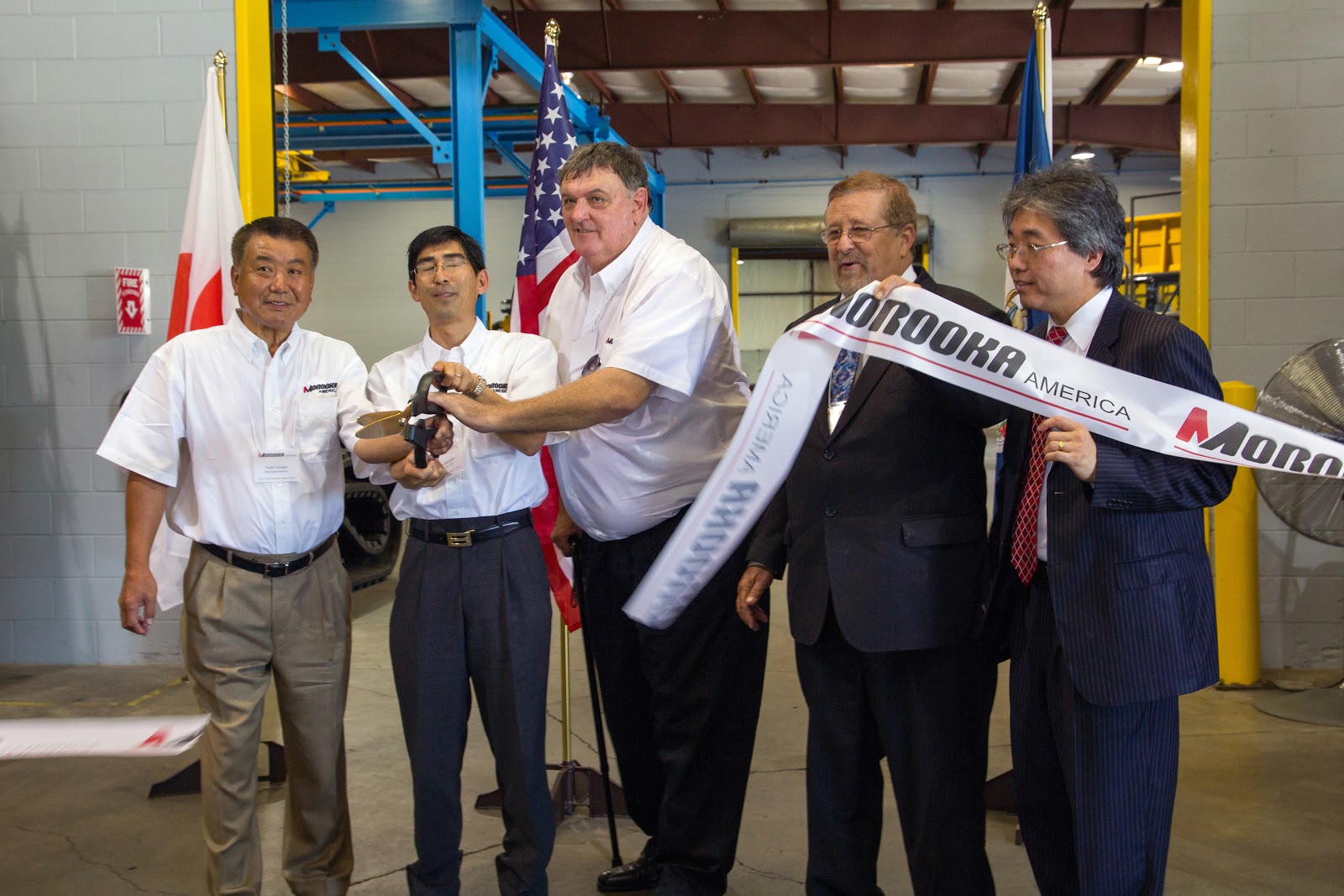 Morooka America, a manufacturer of rubber track carriers, has commenced operations out of their new manufacturing facility located in Hanover County, Virginia. The 50,000 square foot plant is the company’s first American operation and is expected to create up to 50 new jobs over the next 3 years, with an expected output of 100 machines annually. Ron Wright, J&J regional sales manager, attended the Open House last summer where several of the track carriers were on display. Morooka America is a subsidiary of the Richmond Group LLC, a holding company for construction-related firms geared around the Morooka product and located in Ashland, Virginia. Morooka USA - East is the U.S. headquarters for Japan-based Morooka Co.