Presently, J&J is designing a high pressure well service truck for one of the largest oil and gas services companies in the world. Oil and gas well production declines over the life of a well from a variety of factors including paraffin, asphaltene sludge, inorganic scale, wettability and other blockages. These sophisticated service trucks are used to maximize oil and gas production. This design features a 2100 gallon, DOT 412 tank, six (6) stainless steel additive tanks, stainless steel low pressure manifold, high accuracy digital flow meter, and a triplex pump capable of 12 – 84 GPM at 5,000 PSI. J&J engineering collaborates with our customer stakeholders via web conferencing, allowing critical input and design review from multiple locations across the country without the need for travel and project delays.
Posted by Unknown at 10:33 AM No comments:

Pickens Interviewed on CNBC: US Could be Using More Natural Gas

The U.S. has more natural gas than any other country but must do more to tap its potential, billionaire investor T. Boone Pickens told CNBC’s "Closing Bell" in April.
"America has all at once found itself the cheapest energy in the world," Pickens said. There was uncertainty just 10 years ago about whether the U.S. had enough natural gas to be independent, he said. "Today, we have more natural gas than any country in the world," he said, adding it’s the cheapest fuel in the world. "We are using it, but we could be using it in a whole lot of other places."
Transportation is one opportunity for natural gas. Only 200,000 vehicles worldwide used natural gas a decade ago, Pickens said, and now that number is about 20 million. "But the U.S. has been slow to follow," he said. The trucking and rail industries are starting to use more natural gas because the fuel is so cheap, he said.
Washington must do more to stoke demand for natural gas in the U.S., according to Pickens. "Use the cleaner cheaper fuel here—don’t export it and import less oil," he said.
Source: CNBC Online
Posted by Unknown at 10:30 AM No comments: 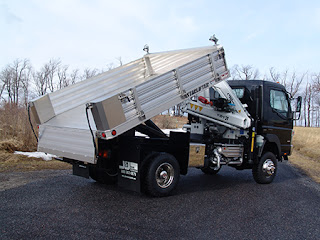 The Mitsubishi Fuso 4x4 chassis, which was provided by Bowser GMC, was upftitted with a flat bed dump body. J&J Truck Equipment also installed an Auto Crane hydraulic articulating crane at the back of the cab. The most challenging part of this job was overcoming an off-set, three piece frame and providing proper reinforcement for the crane mount and support, but J&J got it done and the end user was delighted with the final product. 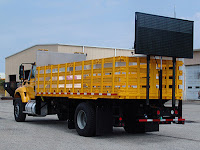 The International chassis to the right was mounted with 20’ flat bed, a sliding sign/light board, and toolboxes. The paint supply truck is being used by a government agency. 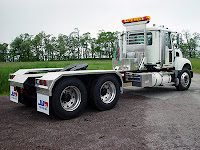 Just a reminder that J&J Truck Equipment installs about 40 wetline systems a year, so we know how to do them right. The next time you need one, get a quote from J&J first. 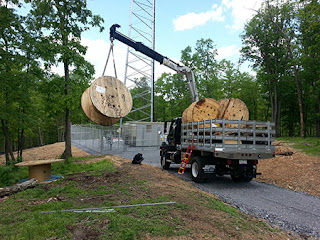 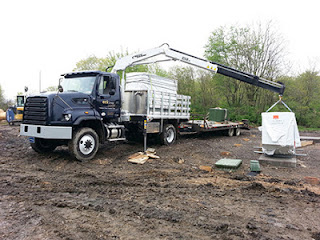 eciWireless has been in business for over 20 years and is located in Dillsburg, Pa. They purchased the chassis from Freightliner of Harrisburg and report that they are very pleased with the unit and the work it is doing in the field.

Posted by Unknown at 8:56 AM No comments: 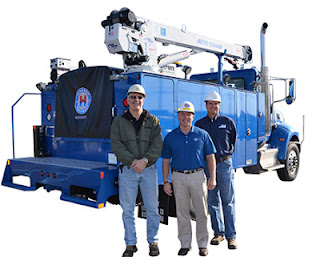 Highway Equipment Company (HEC) has established itself as one of America’s leading sales, rentals, parts and service providers of construction, landscaping, demolition, oil & gas, mining, quarrying, and industrial material-handling machinery. An important part of the company’s business is to dispatch field service trucks out to customer job sites to maintain and repair vehicles and equipment.
Currently the company has 28 technicians,10 cellular dispatched field service trucks, and three shop locations. Recently they added 3 more Peterbilt trucks which J&J outfitted with mechanic service bodies, welder/generators, air compressors, Auto Crane 8,400 lb. capacity cranes, and tarping and drawer systems.
Highway Equipment Company has been in business since 1933 and currently has 4 locations in western PA.

Two of the International TerraStars were mounted with custom Knapheide bodies, light boards, and air compressors. The trucks will be used by the Delaware Department of Transportation. 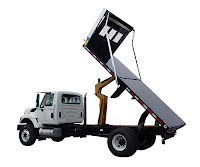 This TerraStar was mounted with heavy-duty steel flat bed and a double acting underbody scissor hoist. The bed is 16 feet, 3 inches long and 96 inches wide. The truck will be used by the Delaware Department of Fish and Wildlife.
Posted by Unknown at 11:58 AM No comments: 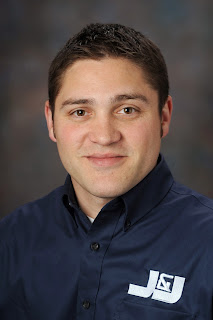 J&J Truck Bodies & Trailers announced the appointment of Jason R. Cornell as Director of Business Development. In this capacity, Jason will be responsible for product analysis, market research, and product definition, design, and launch. In addition, he will manage direct sales for special programs and provide support to the sales and marketing departments.


"Jason brings significant experience in manufacturing and project management to our company. His background, proficiency, and education are valuable assets to J&J Truck Bodies & Trailers and we are pleased to welcome him into his new position," said Michael Riggs, senior vice president of the company.

Cornell has been with J&J Truck Bodies & Trailers for 7 years. He received his Bachelor of Science degree in Business Management from Indiana University of Pennsylvania in 2005. He is also the head coach for Berlin Brothersvalley High School’s wrestling team.

J&J Reaches Out to Mongolia and Beyond


Earier this year, Bill Riggs, president of J&J Truck Bodies & Trailers, traveled to the Asia to explore business opportunities at a large iron ore mine. His first stop was in Beijing where he met with J&J’s manufacturer’s representative, Mike Long, who had flown in from Vietnam where he currently resides. The next day, the two traveled to Ulaanbaatar, the capital of Mongolia, where the first meetings with customers (heavy equipment and truck dealers) began.

The next leg of the journey was a flight from the capital to the small town of Altai. The group landed on a dirt landing strip as there are no paved roads in Altai. The final destination, far into the interior of Mongolia, and after a 7-hour trip through the desert on unimproved roads, was the iron ore mine where the trucks and equipment are needed. Specifically, the mine is interested in J&J heavy-duty dump trailers that will be used to transport iron ore about 70 miles from the mine site to the Chinese border. The mine is also interested in putting mechanic, fuel, lubrication, and tire trucks to work at the site.

The primary purpose of the trip was mapping the haul road with surveyors' GPS to determine the grades and road conditions the tractor and trailer would be operating in. Bill and Mike successfully captured this data to finalize the engineered solution.

Somerset Welding & Steel is committed to expanding globally by offering overseas customers customized solutions that meet their needs and requirements.

There is a reason why J&J is one of the few companies that builds push out trailers. It takes a highly skilled engineering team, complex robotics, experienced welders and lots of know how. Push out trailers, also known as ejector or compaction trailers are primarily used in hauling waste to landfills. The ejector ram pushes all the content quickly and efficiently while maintaining a solid footing in sometimes uneven terrain that is often found at these sites.
﻿
﻿﻿﻿ ﻿﻿﻿


J&J is excited to announce that on our most recent survey reporting instrument, the following results were found:

97% of J&J customers were totally satisfied

100% said they would recommend J&J to their colleagues
Posted by Unknown at 10:51 AM No comments: