Amazing Before and After!

Extend the life of your existing equipment with quality refurbishing and repair at J&J Truck Equipment.

For over 50 years, fleet managers, dealers, and operators have relied on our expertise for all their service and repair work.  At J&J, we offer a full range of services from welding and fabricating to truck body repairing and painting.  Our team of expert technicians has a combined pool of over 100 years in repair experience.

You can rely on J&J for excellent workmanship and a finished product that will last for years. We don’t compromise on quality. Let us prove it by allowing us to quote on your next repair job.

Hylka Construction Company Inc. was established in 1948 and has grown to become a respected aggregate producer and supplier in southern Worcester County. They manufacture washed aggregate and sand for use in all commercial and residential projects throughout their area, including ready-mixed concrete, asphalt production, and pre-cast products such as paving stones and retaining wall blocks. The Hylka fleet of trucks and owner operators provides them with a reputation for timely delivery of products to their valued customers.  The  2002 Volvo Tri-axle was recently mounted with a new J&J aluminum Material Hauler (MH) and it is used to  primarily transport crushed stone and washed sand.  In addition, the company racquired a 2006 Mack CV713 that came equipped with a J&J body that features a high-lift gate. The J&J dump body was a key feature in deciding to make this acquisition.

One of the largest building materials manufacturers in North America, Lehigh Hanson, ordered this J&J lube truck that will be used to service and repair equipment at their production sites, both on the surface and underground. The company produces cement, aggregates (crushed rock, sand and gravel), ready mixed concrete, asphalt, and a range of other building materials including precast concrete products, pressure and gravity pipes, roof tiles, and clay bricks.
Like what you see, follow us on Facebook for weekly updates!

A Workhorse in the Oil and Gas Industry 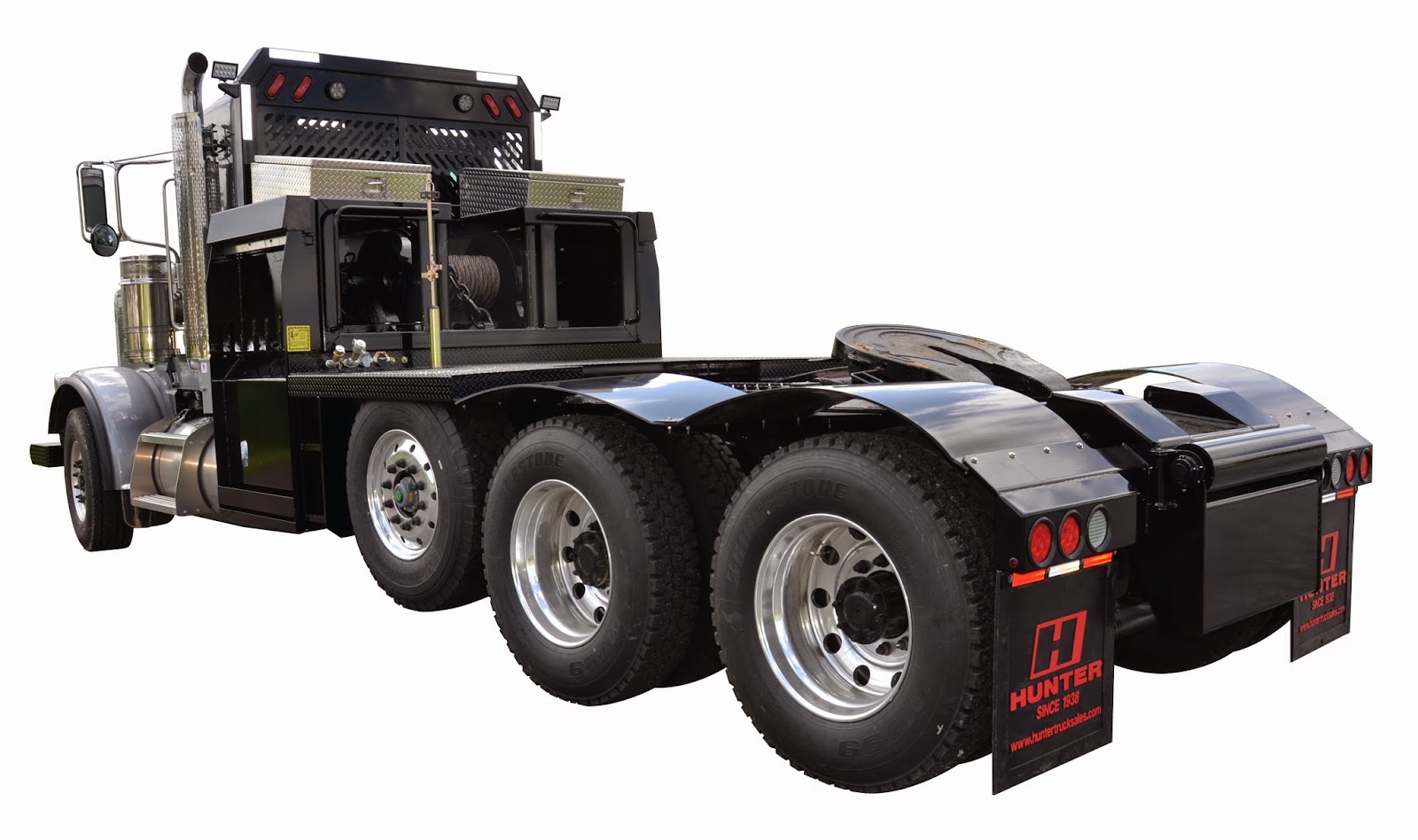 Winch tractors are the workhorse of the oil and gas fields. J&J’s new severe service winch package is engineered to maximize productivity with a focus on operator comfort. From the full length, lockable chain trays and heavy-duty, easy access work platform, to the optional wireless remote controls, J&J’s winch rigging will keep your loads moving under the most demanding conditions.

Rick Springer recently joined the J&J Truck Equipment team as a regional sales manager. Rick is based in Chambersburg, Pennsylvania and will be responsible for truck equipment sales throughout eastern Pennsylvania. He has been involved in heavy equipment and vocational truck sales for over two decades and adds a wealth of knowledge and experience to the J&J team.

Springer will be responsible for increasing sales and providing product support for J&J Truck Equipment’s robust line of service and crane bodies, winch trucks, lubrication trucks, flat beds, and snow and ice equipment. “We are excited to bring Rick on board, and we are confident that his past experience and customer service skills will contribute to the growth of our company,” said David Spear, general manager of J&J Truck Equipment.

Keep up to date on what's new at J&J Truck Bodies and follow us on facebook.
Posted by Unknown at 11:16 AM No comments: 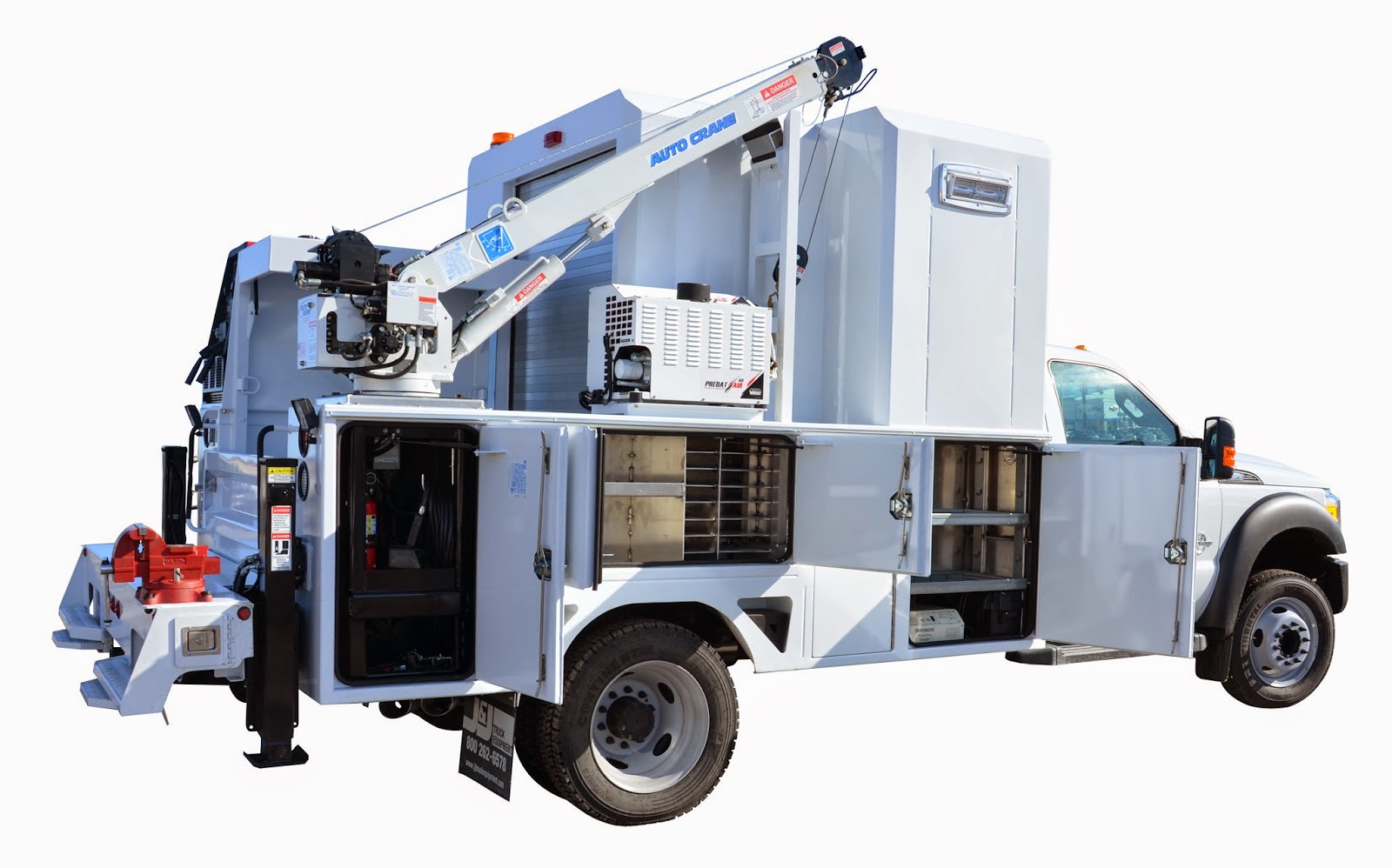 This custom crane service body that’s mounted on a Ford chassis features every component needed to make repairs on job sites fast and easy. Along with standard equipment such as a 3200 lb. capacity crane, welder, and air compressor, the truck also has an enclosed canopy area that will function as a mechanic’s workroom. That enclosure is outfitted with shelving, drawers, work table, lighting, skylight, and bottle holders that can hold small oxygen and acetylene bottles. In addition, the body has a three product lubrication system with mounting for three 55 gallon drums, air operated product pumps, reels and discharge nozzles.

The J&J customer, a gas company, really thought of everything when putting this specification package together, and with the assistance of J&J Truck Equipment’s design and sales team, engineered a truly unique and one-of-a kind truck.

Like our custom work check out some or our specialty fabrications.
Posted by Unknown at 11:10 AM No comments:

Barr International provided the International chassis and J&J Truck Equipment personnel installed a Knapheide flatbed dumper and a Prentice crane to the rear of the cab. The flatbed body also features removable sides, double swing steel grate tailgate, and underbody tool boxes. The customer, Wicomico County in Maryland, will primarily use the truck to pick up whitegoods (washers, dryers, refrigerators, etc.) and take them to recycling centers within the county. Metal from whitegoods can be recycled again and again to make new products. 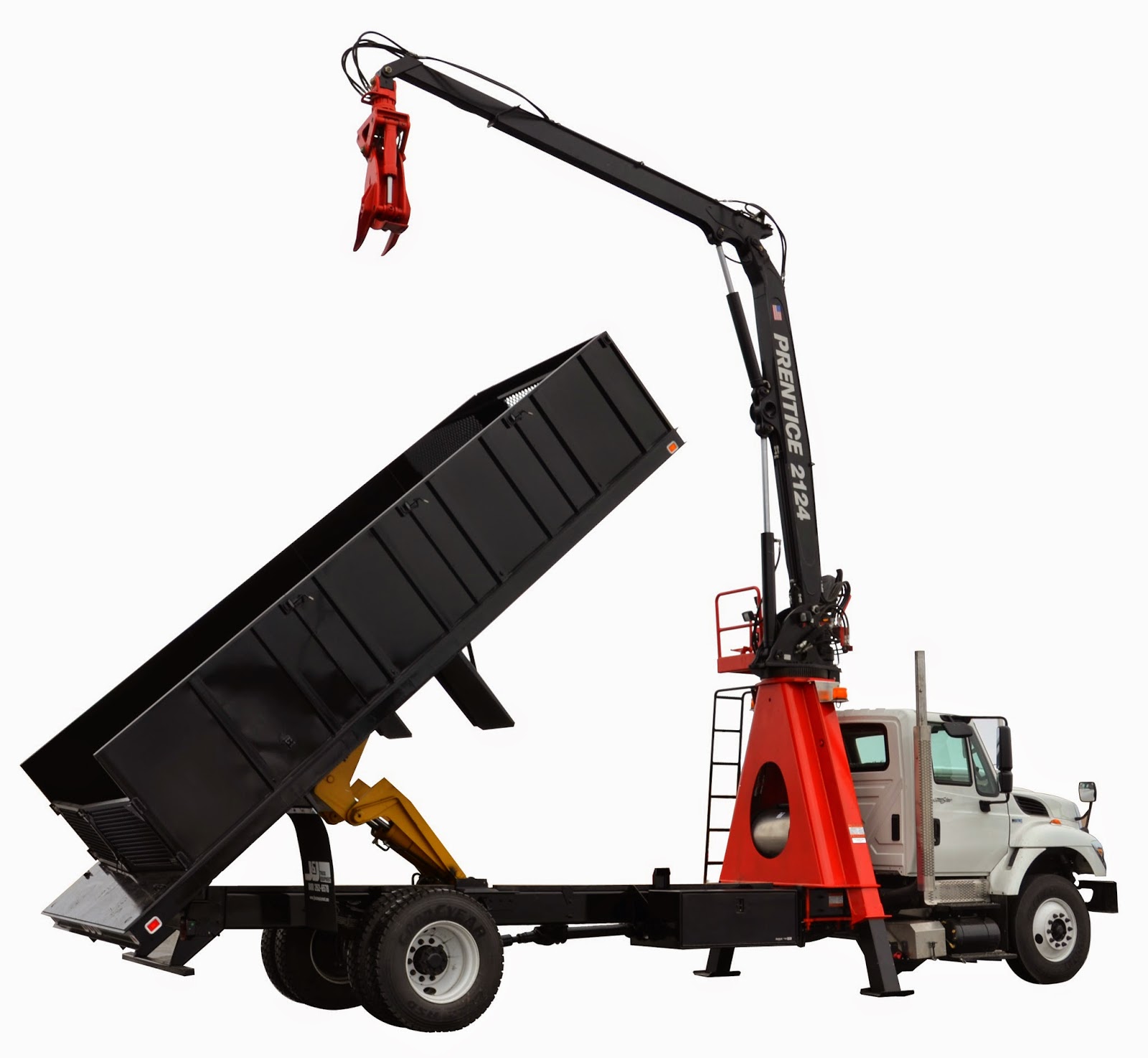 Wicomico County, on a daily average, processes 290 tons of solid waste along with a regional recycling facility that processes recyclable materials for end users. In addition, it also operates 11 convenience centers, (that accept recyclables) and nine recycling convenience drop-off centers.
Posted by Unknown at 11:02 AM 1 comment:

As the Appalachian Basin activity keeps growing, J&J Truck Bodies & Trailers has seen an increase in orders for truck equipment to support this growth. According to the Unconventional Gas Output Report, the Marcellus shale has fundamentally altered the outlook for the US natural gas industry. The US is emerging as a low-cost chemicals producer and is poised to become an exporter of natural gas—a feat unthinkable just 5 years ago when it was widely believed that increasing LNG imports would be needed to meet domestic demand. J&J has been busy manufacturing pressure vacuum tanks, rigging winch tractors, and lubrication trucks for customers involved in the production of natural gas.
Posted by Unknown at 10:56 AM No comments:

J&J Truck Bodies & Trailers’ manufacturing plants are busy fulfilling orders for customers who are expanding and/or replacing their fleets. Typically these customers are working in the construction and/or paving industries and this year is no different. Highway Motors sent 5 International chassis and ordered aluminum Material Haulers (MH) to be installed while a division of Lindy Paving sent 6 Peterbilt trucks to get polished aluminum dump Half Round (HR) dump bodies mounted. Everyone at J&J Truck Bodies & Trailers appreciates the business and the trust placed in us to deliver quality products that are Built for the Long Haul.

A Letter from Mike Riggs

Summer is here, the overhead doors are open, and J&J is pumping trucks out of the plant with construction, energy, and municipal spending driving sales. 2014 has taken off. We hope that you, our customers and industry partners, are experiencing the strong uptick we are experiencing.

It has been exciting to watch and participate in the energy boom that is taking place in the United States. Unconventional shale gas and oil are truly changing the energy outlook for our country. Real capital investment in alternative fuel trucks is following suit. On that note, J&J is finishing up our first large fleet order of Class 8, dedicated CNG dump trucks. J&J was involved in the CNG fuel system install and up-fitting the dump bodies and hydraulic systems. There are more dedicated fleets on the way.

As we have watched the energy picture for the country change, J&J has been reacting to this exciting change by partnering with world class solutions providers such as Landi – Renzo and dHybrid Systems to provide natural gas fuel systems for light, medium and heavy duty trucks, upgrading facilities with natural gas fueling capability, and training and certifying technicians to safely and efficiently work on these new systems. Additionally in 2014, J&J will be introducing our new line of DOT MC-331 propane “bobtail” tanks for retail propane delivery and DOT MC331 propane transport trailers for bulk delivery.

Like us, we understand that you are looking at changes in the market and positioning yourselves to take advantage of that change. If truck bodies, trailers, truck equipment or tier 1 sub-contract manufacturing are part of your change, we would like you to consider us as a strong partner. We are always interested in hearing your ideas and participating if we can add value. We wish you an enjoyable summer with family and friends during your time off and hope your “hair blown back” busy when you’re on.

Michael D. Riggs
Senior Vice President
Posted by Unknown at 8:29 AM No comments:

In May, ten trucks that will run on Compressed Natural Gas (CNG) were delivered to J&J Truck Bodies & Trailers. J&J technicians helped to install the d-HYBRID fuel systems and the units were then outfitted with J&J aluminum dump bodies. As reported in Trailer Body Builders, alternative fuels, particularly natural gas, are gaining market share quickly. CNG is ideal for fleet managers looking for alternatives to costly gasoline and diesel fuel and that’s one of the reasons why Michael Forte, the proud owner of these trucks, decided install CNG tanks on his company’s new Peterbilts which he purchased from Hunter Peterbilt, Clarksburg, NJ. Forte owns MJF Materials, a company he started in 2002 with one truck. Over the years, the company has grown and now operates 25 trucks that haul sand and stone from quarries to asphalt and concrete plants in New Jersey and Pennsylvania. His current customers include Eureka Stone Quarry, JDM Materials, Delaware Valley Concrete, and American Asphalt.


Michael Forte believes that CNG is the future when it comes to alternative fuels. He maintains that it is clean, renewable, and safer than diesel. According to Forte, “I do not want to support foreign oil coming into this country when we have more CNG in our own country. The United States has the largest supply of natural gas in the world, so I say let’s keep Americans working in America.”

To support these efforts, he is building a state-of-the-art CNG station on his property that will have 4 Fast-Fills and 48 Slow-Fills. Currently there are 33 CNG stations in New Jersey. Only 7 are open to the public and they are Fast-Fills. Forte plans to open his Fast-Fills to the public while his Slow-Fills will be used for his private use and outside commercial use.
At this point, Michael Forte and his company, MJF Materials, has the largest commercial fleet of dedicated CNG tri-axle dump trucks in the country. It is easy to see that Forte is completely committed to CNG. “We can create and rebuild our infrastructure with new technology and new jobs. Let us put America and Americans first,” says Forte.